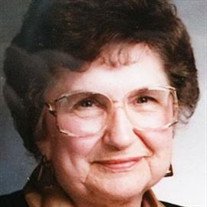 Her memorial service will be at 11:00 a.m. on Friday, April 7, 2017 at St. John's Lutheran Church in Bloomington with Pastor Christine McNeal officiating. Visitation will be from 10:30-11:00 a.m. prior to the service at the church. Interment will follow the service at Park Hill Cemetery. Kibler-Brady-Ruestman Memorial Home in Bloomington is assisting the family with arrangements.

She was preceded in death by her parents, and her brother, Paul Krueger.

Dorothy was educated at Trinity Lutheran School and Bloomington High School. She was a graduate of St. Joseph's School of Nursing, Class of 1938, and worked for many years as a registered nurse in Bloomington.

She was an avid reader and bridge player. Dorothy was a member of St. John's Lutheran Church, past-president of the Bloomington Normal Women's Club, and a member of the Dozen Club (a women's book club).

Dorothy was a resident of Westminster Village in Bloomington from November 2003 until her move to Chicago in 2016.


To send flowers to the family or plant a tree in memory of Dorothy K. Lovell, please visit our floral store.

To send flowers to the family in memory of Dorothy Lovell, please visit our flower store.
Send a Sympathy Card