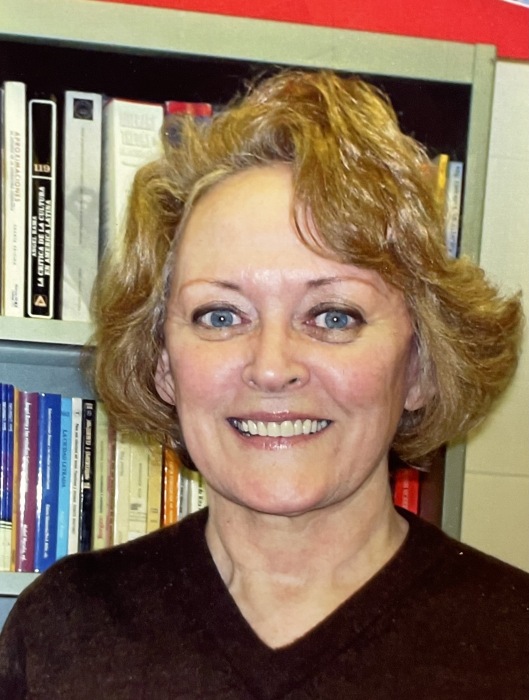 Dr. Dolores Jean Buttry, 77, formerly of Bloomington, passed away on July 1, 2021; at 9:16pm in Charlottesville, VA, after a long battle with complications from a stroke she suffered a year earlier. She was predeceased by her parents Pleasant and Valma Buttry (Bloomington), her brother David Buttry (Las Vegas), and sister Marcia Fogel (Summerville).

Kibler-Brady-Ruestman Memorial Home will be hosting a memorial service in remembrance of Dolores on Saturday, July 17, at 2pm. A visitation for family and friends will be held prior, starting at 1pm; all are welcome. Interment will be in accordance with her wishes at a later date, in a private ceremony to be held in Germany.

Following high school, Dolores graduated from Illinois State University in 1967. While attending ISU, she received a Fulbright Scholarship to study in France. It was during this trip that her love of all things European really began to flourish.

After leaving Bloomington-Normal, she went on to have a life-long academic career as a professor of foreign languages at multiple universities to include: Johannes Guttenburg University in Germany, University of Pittsburgh-Johnstown, University of Kentucky, Moorehead State University, Wesleyan College, Mary Washington College, Carnegie Mellon, Virginia Commonwealth University and Harvard University (Mellon Faculty Fellow).

She would earn two Doctorate Degrees; one in French (University of Pittsburgh, 1997), and one in Comparative Literature (University of Illinois, 1978)

She was a published academic scholar. Her work on Norwegian author Knut Hamsun, is very highly regarded. Due to her work and contributions, she was awarded the title of 'Honorary Norwegian' by her colleagues.

Deeply passionate about languages, she learned German, French, Norwegian, Italian, and Spanish. Using her talent and education, Dolores taught foreign languages to thousands of college students over five decades. She loved to show the linkage between culture, history, music and languages.

Speaking fluent German, Dolores had a deep connection with the German people and the country itself. Her eyes would always light up when talking about her summer sabbaticals there amidst the rolling meadows surrounded by mountains, and the wandering streams and lakes.

Another passion of Dolores' was classical music and playing the cello. A constant companion, she brought it with her throughout her travels. She played with various orchestras and orchestra clubs her entire life. Her beloved cello will play on as a donation to the Wednesday Music Club in Charlottesville.

Above all, Dolores was a fiercely independent, world-traveling, cello playing, "bon vivant" who loved learning and teaching languages, and the unique cultural heritage they represent. Her memory will live on, in the hearts of her loved ones, friends, colleagues and her beloved students.

Flowers, contributions, and condolences can be sent directly through her online obituary at the Kibler-Brady-Ruestman Memorial Home website.

To send flowers to the family or plant a tree in memory of Dr. Dolores Jean Buttry, please visit our floral store.

To send flowers to the family in memory of Dr. Dolores Buttry, please visit our flower store.