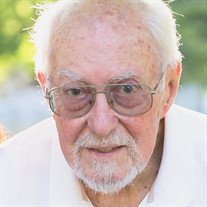 A private family burial will be held at East Lawn Memorial Gardens.

Kibler - Brady-Ruestman Memorial Home is in charge of the arrangements.

He served in the U.S. Marine Corps from 1956 - 1962, after which he worked at Slavens Collection Agency in Bloomington, eventually acquiring the agency and renaming it Anderson Financial Network, Inc. (now AFNI) serving as President from 1975 to 1995. In addition, he was an owner of Prairie Signs, Inc., a partner in an insurance firm (Insurance Producer,) and founder/owner of Credit Bureau of Woodford County, McLean County License & Title, Property Owners and Managers Association (POMA,) The American Distributing Company, Crossroads Auction Company, Anderson Advantage Holding company, Anderson Triad Company, and was a partner in 462 Partners in Decatur, IL.

Along the way he obtained his private pilot's license, a thrilling achievement.

Earl had many friends and loved to tell stories and jokes to make people laugh. He made an impression on everyone he met. He liked to tell anyone who would listen about being absolutely smitten the first time he saw his future wife Suzanne, and how he had never recovered-he loved her more with each passing day.

In 1973, he became a follower of Christ, sharing his faith with others and offering good counsel and a listening ear to friends in need. It is a special blessing to his family that he was born on Easter Sunday in 1934, and was called home to be with the Lord on Easter Sunday in 2020.

He was preceded in death by his parents, sister, Jennie Anderson, a son, Curt Anderson, and a grandson, Curt Mocilan, on whose birthday Earl will be buried.

Words can never convey how much he meant to his wife and children. He was a good provider and a devoted and loving husband, father, grandfather, brother and uncle. He was much loved and his legacy will live on in our hearts until we are reunited with him by Jesus Christ, the Savior.

To send flowers to the family or plant a tree in memory of Earl Bryant Anderson, please visit our floral store.

To send flowers to the family in memory of Earl Anderson, please visit our flower store.
Send a Sympathy Card