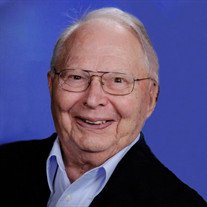 Edward L. Diggle, 97, formerly of Bloomington and Gridley, passed away peacefully on Friday, March 1, 2019 at Apostolic Christian Nursing Home in Eureka, Illinois.
His funeral service will be at 11:00 a.m. on Friday, March 8, 2019 at Wesley United Methodist Church in Bloomington with Pastor Keith Ferguson officiating. Visitation will be one hour prior to services at the church.
A graveside service with military honors will be at 2:00 p.m. in Gridley Cemetery in Gridley. Memorial contributions may be directed to Eureka Apostolic Christian Home c/o Heiterland or American Heart Association. Kibler-Brady-Ruestman Memorial Home in Bloomington is assisting the family with arrangements.
Ed was born on January 17, 1922 in Gridley, a son to Henry and Clarissa Benedict Diggle. He married Bee Bower on February 7, 1953 in the Bower family home. They were married for 62 years until she passed away on October 20, 2015.
He was a loving father to his son, David (Susan) Diggle of Germantown Hills and daughter, Alice Cantwell (Bret Cook) of Moorpark, CA; six grandchildren, Ben (Melissa) of Peoria, Amy of Peoria, Daniel of Germantown Hills, Chris (Cathleen) Cantwell of Moorpark, California, Libby (Jerrad) Hare of Moorpark, California, and Andy (Heather) Cantwell of Ojai, California and great grandad to seven great-grandchildren, Addie, Ryan and Holden Hare of Moorpark, California, Liam and Eddie Cantwell of Moorpark, California, and Christian and Chloe Cantwell of Ojai, California.
He was preceded in death by his parents; stepmother, Hortense; sister, Betty; brother, John and son in-law, Bill Cantwell.
He served in the United States Army Air Corp. during WWII and was stationed in England and France.
Ed was a long-time member of the Gridley Community Club and enjoyed their fish fries, steak cookouts, and chicken fries. He often stated that if he, Paul McKey, Rodney Kirkton and others had a one dollar bill for every piece of fish, chicken or steak they cooked through the years, they would have had a tidy sum.
He was Chief of the Gridley Fire Department from 1956-1964.
Ed started working for Bower Automotive in Bloomington, Illinois in 1955. He became Vice-President in 1970 until his retirement in 1986.
He loved to farm, fish, and snowmobile with friends in Northern Wisconsin, and spend time with family and friends.
The family wishes to express their gratitude to the entire staff at the Apostolic Nursing Home in Eureka for the comfort and tenderness shown towards our father.


To send flowers to the family or plant a tree in memory of Edward L. Diggle, please visit our floral store.

Please click here to view the video tribute
To send flowers to the family in memory of Edward Diggle, please visit our flower store.
Send a Sympathy Card