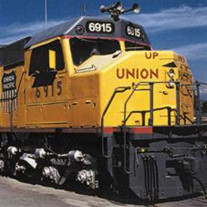 A memorial visitation will be held from 4:00-6:00 p.m. on Thursday, February 15, 2018 at Kibler-Brady-Ruestman Memorial Home in Bloomington. Cremation rites have been accorded per his wishes.

Inurnment will take place at a later date. Memorials may be made to the American Heart Association.

Edward was born on September 25, 1949 in Bloomington, a son to Rodney C. And Mary E. Dunn Spillman.

Edward was preceded in death by his parents and a brother, Rodney M. Spillman.

As an avid train enthusiast, Edward spent 40 years as a 4th generation brakeman for Union Pacific, retiring in 2010. He enjoyed model trains and maintaining the steam engine at Miller Park. He was a member of the United Transportation Union and Central Illinois Railroad Club. Edward enjoyed having coffee with his friends at Times Past Inn, participating in the railroad retirees breakfast once a month at Shannon's, and socializing with his friends at the Western Tap.


To send flowers to the family or plant a tree in memory of Edward C Spillman, please visit our floral store.

To send flowers to the family in memory of Edward Spillman, please visit our flower store.
Send a Sympathy Card