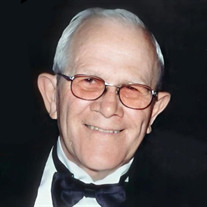 Bloomington - Eldon Joseph Hinshaw, 83, of Bloomington, passed away on Tuesday, June 2, 2020 at his home with his loving wife of 60 years at his side. His wishes to die at home were honored.

A private family mass at St. Mary's Catholic Church in Bloomington will be held. Interment will be at Scogin Hill Cemetery in Bloomington, where a graveside service will begin at 12:00 p.m. on Saturday, June 6, 2020. Friends are encouraged to come and practice social distancing.

Memorials may be directed to St. Mary's Catholic School in Bloomington. Kibler-Brady-Ruestman Memorial Home in Bloomington is assisting the family with arrangements.

Eldon was born in Rural Bloomington on October 8, 1936 to James Deane and Kathryn Adaline (Weidinger) Hinshaw. He married Jessie Lemons on July 25, 1960 in Pontiac.

Eldon graduated from Normal Community High School. He was a life-long member of St. Mary's Catholic Church in Bloomington. Eldon was employed at General Electric Company, retiring after forty-two years. In his spare time, he enjoyed playing softball, camping with his family, and hunting.

He was a member of the McLean County Emergency Squad and past treasurer on the board of trustees for the Bloomington Township Fire Department. Eldon also proudly served his country in the United States Army.

To send flowers to the family or plant a tree in memory of Eldon J. Hinshaw, please visit our floral store.

To send flowers to the family in memory of Eldon Hinshaw, please visit our flower store.
Send a Sympathy Card