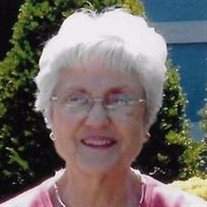 Born on June 1, 1927, in Brushy Mound Township, Illinois, she was the daughter of the late Henry and Clara Rhodes Behme. She is preceded in death by her former spouse, Richard Fagerburg, and siblings Erwin Behme, Floyd Behme, Henry Behme, Stella Coffey, Lela Robinson, Irene Peacock, Iva Loveless and Myrtle Karrick.

Esther grew up in a large family on a farm outside Carlinville, Illinois, graduated from Carlinville High School in 1946, and attended Illinois State University. Esther married Richard Fagerburg on April 16, 1950. She moved to Bloomington to work for State Farm Insurance Company and was executive secretary to a vice president before taking time off to care for her mother-in-law. Esther was employed by E.F. Hutton, A.G. Edwards, and Centennial Christian Church in Bloomington. After moving to Connecticut, she served as the assistant to the manager at The Erwin Home in New Britain, Connecticut, working into her late 80's.

Esther was an active and involved member of First Baptist Church of Bloomington, serving in a number of lay leadership roles. At South Church of New Britain, Connecticut, she was a deacon and Stephen Minister. Esther embodied what it meant to live by faith and serve God by loving others. Quiet and soft-spoken, yet lively, Esther was known for her kindness, compassion, and willingness to serve. Esther championed wellness and healthy living all her life. She was tiny, energetic, and always impeccably dressed. She loved to garden and took pleasure in taking care of the people and plants in her life. She was a loving sister and friend, a beloved aunt, a wonderful mother, and an attentive and devoted grandmother. Her family is so thankful for her love and all she taught us about God's love.

Esther is survived by her children Mark Fagerburg, of Danvers, Illinois, Matt and his wife, Carmen Fagerburg, of Spring, Texas, Katherine Fagerburg and her husband, Vernon Baker, of New Britain, Connecticut, grandchildren Rick (Morton), Matthew, Michael and Marissa Fagerburg, Baker (Abi) and Samuel Baker, and great-grandchildren Michael and Macey Fagerburg. She is survived by her siblings and their spouses, Verna and Richard Knudson of Carlinville, Illinois and Carl and Charlene Behme of Carlinville, Illinois, and 27 nieces and nephews.

To send flowers to the family or plant a tree in memory of Esther Agnes Behme Fagerburg, please visit our floral store.

To send flowers to the family in memory of Esther Fagerburg, please visit our flower store.