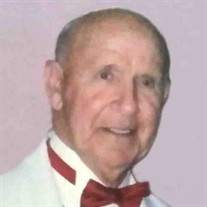 His graveside service will be held at 2:00 pm on Friday May 20, 2016 at Hopewell Cemetery in Downs with Grandson, Minister Eric Anderson officiating. Kibler-Brady-Ruestman Memorial Home is assisting the family with arrangements.

Memorials may be made to Sound of Illinois Chorus or Community Cancer Center.

He was preceded in death by his parents, J. Lester and Merna Dawson, brother J. Ralph Dawson and sister Marjorie West.

Francis was a General Contractor by trade. He started at an early age, being taught by his Father. He worked alongside his Father and with his brother for many years. The current Dawson Addition in Clinton, Illinois was planned and developed in the late 40's & early 50's by J.L. Dawson and Sons.

Francis moved to So. California, building a thriving contracting and restoration business. He enjoyed all aspects of contracting from design through completion. He especially enjoyed working with his customers, becoming long-time friends with many of them. While living in So. California he worked with Navajo children instructing them in contracting skills and a few of the students went on to work for Francis. He also had his own bowling team for a few years.

After retiring, Francis and his wife, Mickey, returned to Illinois in 1996 to be close to relatives and childhood friends.

In 1996 Francis joined the Sound of Illinois Barbershop Chorus, who will be singing at his funeral. His association with the dedicated singers provided some of his most enjoyable moments. In 2001 he was voted "Barbershopper of the Year" in addition to, serving as Sunshine Chairman.

Francis loved life to the fullest and will be remembered for his sunny disposition and ever present smiles, jokes and the love he had for his devoted wife, Mickey. He and wife Mickey cherished doing everything together side by side, having a truly remarkable love story. They loved Spending time with their children and grandchildren. He will be greatly missed by all who loved him and by his many treasured friends. He was a people person as evidenced by the many people he made friends with everywhere he went.

Online condolences and memories of Francis may be left for the family at kiblerbradyruestman.com.


To send flowers to the family or plant a tree in memory of Francis E. Dawson, please visit our floral store.

To send flowers to the family in memory of Francis Dawson, please visit our flower store.