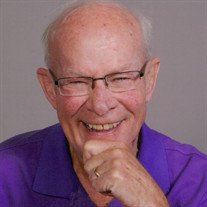 He was preceded in death by his parents; a brother, Orville; a sister, Miriam; and an infant daughter, Laina.

He graduated from Minnehaha Academy, Minneapolis, in 1960. He received a BA from Augustana College, Rock Island, Illinois, in 1964; a MS Ed from Northern Illinois University, DeKalb, Illinois, in 1970; and a Doctor of Education (Ed.D.) in Higher Education Administration from Nova Southeastern University, Fort Lauderdale, Florida, in 1979.

Fred was a life long Lutheran, serving as president of Trinity Lutheran, Moline, and of St. John's Lutheran, Bloomington. In Rock Island, Fred served as president of Easter Seals Society of Rock Island County and as a member of the Rock Island school board for 8 years, coaching Little League baseball in between meetings. He was an avid fan of the White Sox, "da Bears," and the Blackhawks. He especially enjoyed his summers in Door County.

Music, humor, and friendships were important themes in Fred's life. In fact, Fred first met Jan leaving the first choir rehearsal of the 1963 fall semester at Augustana College. He proudly sang in the St John's Choir for 26 years. He loved telling fun stories and jokes wherever he was, including as a member of the local Scandinavian Cultural Group. He thoroughly enjoyed friendships and reunions, including those of his college fraternity and high school.

Fred put people first, and knowing that he had advantages that others did not, he advocated for the less fortunate all his life. One of his favorite sayings was from Elizabeth Gilbert: "In the end, though, maybe we must give up trying to pay back the people in the world who sustain our lives. In the end, maybe it's wiser to surrender before the miraculous scope of human generosity and to just keep saying thank you, forever and sincerely, for as long as we have voices." Fred's voice has fallen silent, but his spirit is still alive in the many who loved him, respected him, and were warmed by his generous friendship.


To send flowers to the family or plant a tree in memory of Frederick 'Fred' Peterson, please visit our floral store.

To send flowers to the family in memory of Frederick Peterson, please visit our flower store.