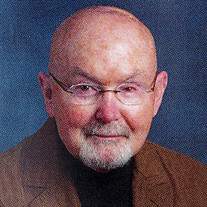 His memorial service will be held at a later date. Cremation rites have been accorded. Kibler-Brady-Ruestman Memorial Home in Bloomington is assisting the family with arrangements.

Gary was born August 16, 1936, the son of Robert and Sylvia Hoover, in Provo, Utah. The family moved to California where he lived until he graduated from San Jose State University. He married Wanda Lillemoe on June 23, 1962. They lived in Bellevue, Washington until returning to Southern California for one year. With two children, the family of four moved to Normal, IL in 1969 with State Farm. Gary continued to work with State Farm in Actuarial Science developing commercial insurance policies for the remainder of his career before retiring in 2000.

Gary was a member of Young Men's Club and SOBs (a book club founded in the late 1980's by the late Irving Tick). Gary was an active supporter of various music, theater, and art organizations in the Bloomington-Normal community.

Gary was always physically active and lived life to the fullest, spending time with family and thoroughly enjoying his time with his large group of friends. In his later years, Gary traveled the world to roughly 80 countries with his best friend and soulmate, Judie Bey, of Bloomington, she survives. He always enjoyed himself and learned something new on every trip he took.

To send flowers to the family or plant a tree in memory of Gary A. Hoover, please visit our floral store.

To send flowers to the family in memory of Gary Hoover, please visit our flower store.