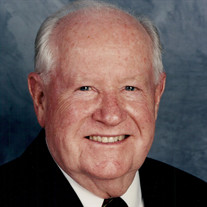 His inurnment will be at 1:00 p.m. on Thursday, August 17, 2017 in Camp Butler National Cemetery in Springfield, Illinois with Fr. Jeff Grant officiating. Full Military Rites will be accorded by Inter Veterans Burial Detail of Sangamon County and United States Navy Detail.

In memory of Gene, memorials may be made to an education fund for his grandchildren and great grandchildren at Prairie State Bank & Trust, c/o Mary Ann Dillman, 3751 Wabash Avenue, Springfield, IL 62711.

He was preceded in death by his wife, Eileen; his parents and his six siblings, Glenn, Merle, Delmar, Ted, Betty and Helen.

After losing the family farm during the Great Depression, Gene grew up in Pekin, Illinois and graduated from Pekin High School. He obtained a Bachelor of Science in History from Illinois College.

Gene proudly served in the United States Navy during WWII as a commander of a supply ship from 1942-1944. Upon his discharge from the Navy, he earned his Master of Journalism degree from Columbia University in New York.

He began working for the Daily Pantagraph in Bloomington, Illinois, as state reporter in 1948, covering the Illinois General Assembly. He was elevated to the position of managing editor from which he retired in 1982. During this time, he received numerous awards from AP and UPI.

Gene loved singing and participated in the SPEBSQSA Barbershop Quartet and Chorus in Bloomington, Illinois. During the 1950s his quartet won an international award in California. Gene could always be heard singing to his family and friends. He was a long time Chicago Cubs fan and was overjoyed when they won the World Series.

His greatest loves were his brothers and sisters; his wife, Eileen of 58 years; and his children, grandchildren and great grandchildren. Gene's passion was traveling the world every chance he got. He always had a song in his heart and a smile on his face. He was greatly loved and will be truly missed.


To send flowers to the family or plant a tree in memory of Gene F. Smedley, please visit our floral store.

To send flowers to the family in memory of Gene Smedley, please visit our flower store.
Send a Sympathy Card