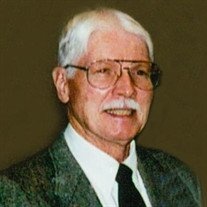 His memorial service will be at 1:00 p.m. on Saturday, October 27, 2018 at Kibler-Brady-Ruestman Memorial Home in Bloomington with Pastor Keith Ferguson officiating. Visitation will be one hour prior to the service at the memorial home. Military rites will be accorded by the Bloomington-Normal American Legion Honor Guard. Per the family's wishes casual dress is appropriate.

Memorials may be directed to the family.

Jerry was born on October 25, 1930 in Normal a son to Herbert and Hilda Johnson Lusher. He married Cora Nell Bates in August 1951. They enjoyed 65 years together before she preceded him in death on August 20, 2016

He was preceded in death by his parents; a son, Jeffrey Lusher; three brothers, Herbert Lynn Jr., James Russell and George Richard (infancy) and one sister, Jane Folena Freeman.

Jerry proudly served in the United States Army during the Korean War, stationed in Korea.

He was employed with Allstate Insurance Company as an insurance agent for over 50 years retiring in the 1980s. Later Jerry was employed at Walmart in Normal and was an administrator at the Loyal Order of Moose in Bloomington for over 15 years. After retiring from Walmart he volunteered for several years at Ironwood Golf Course in Normal.

Jerry continued his work with the Loyal Order of Moose as a member and volunteer for over 50 years. He was also a member of the American Legion Carl S. Martin Post #635 in Normal where he played cornet in the band.

He enjoyed golf and fishing, and was an avid Chicago Cubs and Bears fan. Jerry will be remembered as a family man. His greatest joy was spending time with his family.


To send flowers to the family or plant a tree in memory of Gerald 'Jerry' L. Lusher, please visit our floral store.

To send flowers to the family in memory of Gerald Lusher, please visit our flower store.