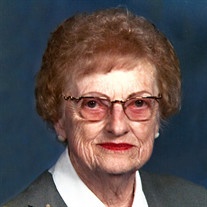 Her memorial service will be at 1:30 p.m. on Friday, March 24 at First Presbyterian Church, in Normal with Pastor Larry Gaylord officiating. A private inurnment will be held in Park Hill Cemetery in Bloomington. Kibler-Brady-Ruestman Memorial Home is assisting the family with arrangements.

Memorials may be made to Illinois State University Civic Chorale Fund, the ISU Athletic Department, or to First Presbyterian Church Chancel choir in Geraldine's memory.

Jerry was born October 28, 1918 in Chicago, Illinois a daughter to Thomas F. and Flora (Antisdel) Meteer. She married John McGinnis on August 9, 1941 in Des Plaines, Illinois. He preceded her in death in December of 1993.Jerry was also preceded in death by her parents, Thomas and Flora; a brother, Clyde Meteer; and a sister, Ruth L. (Meteer) Friebel.

Jerry graduated from Maine Township East High School in 1936, and attended Illinois State University, graduating in June of 1940 with a Bachelor's degree in Education. Her first teaching job after graduation was at Vandalia High School. In 1946, she began teaching music at Arrowsmith Community Schools, where she helped organize the school band. The Arrowsmith school reunions, which she attended for many years, were always a highlight of her days.

In 1951, Jerry and her husband, John became owners and operators of The Color Wheel. Upon her graduation from the Chicago School of Interior Decoration, Jerry became the Interior Designer for the company. From their location on Main Street in downtown Bloomington, they became known for their quality workmanship and creative design. Jerry's primary satisfaction in life was decorating many homes and businesses in Bloomington/Normal and surrounding communities. She celebrated more than 60 years of service prior to retiring and closing the Color Wheel.

Jerry was a member of Altrusa, International, Inc., a non-profit organization that strives to make local communities better through leadership, partnership and service. She participated in the local Bloomington chapter of Altrusa, which disbanded in 1996.

She was an avid fan and supporter of ISU basketball, and also was a past member of ISU's Civic Chorale. She sung with the group for more than a decade. She and husband John were long-time members of First Presbyterian Church, where they both sang in the church's Chancel Choir. Her involvement with the Choir continued for nearly 70 years.


To send flowers to the family or plant a tree in memory of Geraldine "Jerry" McGinnis, please visit our floral store.

To send flowers to the family in memory of Geraldine McGinnis, please visit our flower store.