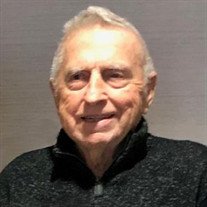 A public celebration of life will be held at a later date. Interment will be at Park Hill Cemetery in Bloomington with Rev. Brian Hastings officiating. Kibler-Brady-Ruestman Memorial Home in Bloomington is assisting the family with arrangements.

In lieu of flowers, memorial contributions may be made to First Baptist Church in Bloomington, Illinois Cancer Care Foundation, McLean County 4H Foundation or to the donor's choice.

He was preceded in death by his parents, his wife, son, David, and an infant sister, JoAnne.

Gordon grew up watching his father milk cows on his family's purebred Jersey Dairy/Grain farm. By the time he was six years old, he too, was helping milk cows by hand before his father purchased a milking machine a few years later.

He joined 4H at the age of 10. While his first heifer didn't develop correctly, his second heifer, a Jersey cow named Corianda, would help kick start his 4H career. In Gordy's words "she was the perfect show cow." With great pride he remembers, "she got a little bit better every year until she was finally the champion of all the Jerseys at the junior show and open show." The two of them went on to win many 1st, 2nd and 3rd place awards, winning five purple (Grand Champion) ribbons in one day. This experience kicked off a lifelong dedication to 4H where he led a 4H club for over 75 years. The Silverleaf Let's Go 4H Club held annual June Dairy month promotions throughout the community. One event was an international milk drinking competition with a youth organization in England. This event was coordinated by the local radio station and received quite a bit of publicity locally and abroad for its time.

Gordon graduated from Normal Community High School as Valedictorian of his class and went on to the University of Illinois, graduating in 1955. During college Gordon received his commission as a 2nd Lieutenant in the ROTC program and was a member of the Farm House Fraternity making lifelong friends. The day after his graduation from the U of I he married Roberta Cutter and returned to the family farm raising anywhere from 40-100 Jersey cattle at a time. Together they had three children, Diana, Darren and David.

In addition to working the family farm, Gordon was employed by Funk Seed Company as a young man. Following in his Father's footsteps, Gordy was naturally drawn to community service. He remained active in the agriculture community, being selected as a delegate to the Illinois Agriculture Association Convention by the McLean County Farm Bureau in 1960 at the age of 27. Around this time, Gordon was state director of the American Dairy Association of Illinois, secretary-treasurer of the Illinois Jersey Cattle Club Association, president of the Dairy Herd Improvement Association of McLean County, served on the executive committee of the American Dairy Association and Captain in his local National Guard. Gordon and Roberta were also selected by the Pure Milk Association as the Outstanding Young Dairy Farm Couple in District 2.

In 1968 he received a call asking if he would be interested in interviewing for the Assistant Director of Agriculture position in Springfield. At first Gordon was unsure-his brother Ray had just returned from military service in Korea. The entire family sat down to discuss how the farm would be run now that Ray had returned and Gordy might be pulled away from the farm to assume a state position. Gordon's family encouraged him to go to the interview and the rest is history as in 1969 he accepted the position and Ray focused on running the family farm.

Gordon was Assistant Director of Agriculture for one year under Director John Lewis, promoting Illinois agriculture products throughout the country and state, assisting in budget development and speaking on behalf of the Director. In 1970, Secretary of State Paul Powell died, and John Lewis was appointed to take his place. With Lewis's appointment to Secretary of State, Gordon was appointed as Director of the Illinois Department of Agriculture.

In his time as Director, Gordon implemented many new programs and practices while continuing to promote Illinois agriculture across the globe. One of his achievements which he was particular proud was the eradication of hog cholera, a highly contagious swine disease. "To the pork industry, this was a major plus because if your farm had cholera you had to depopulate all the hogs on the farm," said Gordon. "We had a great event when the state was certified."

While in office, Gordon oversaw the implementation of the Centennial Farm Sign program which recognized Illinois farms which have been in a single family for 100 years. That programs continues today.

Gordon had a long, active career as the 88th District Representative from 1979 to 1993. He served on many House Committees, including Appropriations, Higher Education, Agriculture, Executive and Public Utilities. After his time as Representative, Gordon served as the Rural Affairs Liaison to the Secretary of State. It was in this position he spent the last 10 years before retirement, connecting rural organizations and businesses with the Secretary of States' Office and speaking before civic groups.

Additional recognitions include being a member of the Clarence Ropp 4H Family Spirit Award in 2003, 4H Volunteer in 2005 and Illinoisan of the Day at the Illinois State Fair in 2010.

To send flowers to the family or plant a tree in memory of Gordon "Gordy" L. Ropp, please visit our floral store.

Please click here to view the video tribute
To send flowers to the family in memory of Gordon Ropp, please visit our flower store.