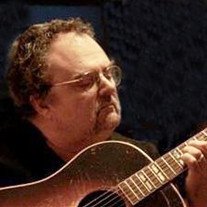 Normal - Harold "Hal" Lee Greenwood, 67 of Normal, Illinois passed away at 6:30 p.m. on Monday, February 27, 2017 at his residence in Normal where he recently moved with his wife, Marcia to be closer to his daughters.

His memorial service will be at 11:00 a.m. on Tuesday, March 7, 2017 at St. John's Episcopal Church in Oklahoma City, Oklahoma with David Schnabel officiating. Kibler-Brady-Ruestman Memorial Home in Bloomington, Illinois is assisting the family with arrangements.

Memorials may be made to St. Anselm's of Canterbury, 800 Elm Avenue, Norman, OK 73069 in support of campus ministry.

Hal was born in Cushing, Oklahoma on March 6, 1949 a son to Harold "Bub" LeeRoy and Doris Blevins Greenwood. Hal was married to the true love of his life, Marcia Cozart Greenwood, on September 6, 1970 at the Cozart family farm outside Waukomis, Oklahoma and together they raised four children.

He is preceded in death by his parents, Bub and Doris, and by Marcia's parents Joseph Hugh Cozart and Dorothy Thomas Cozart.

Hal had a love of learning and explored writing, acting, teaching, and music. He attended General Seminary in New York City, and was ordained as an Episcopal Priest in 1978. Later, Hal served joyfully, both as a parish priest and especially as Cannon Missioner alongside his very good friend, Charles Woltz (Cannon to the Ordinary). Hal also eagerly mentored potential candidates for the ministry, continuing that role with many newly ordained priests.

He was committed to youth ministry and spent several years as the director of the Episcopal summer camp program. Later he was privileged to serve in campus ministry at St. Anselm's of Canterbury in Norman, Oklahoma.

Hal was also a lifelong and passionate musician. An accomplished singer songwriter, he spent many years writing music for the youth ministry as well as with his longtime songwriting partner Lindy Hearne.


To send flowers to the family or plant a tree in memory of Harold "Hal" Lee Greenwood, please visit our floral store.

To send flowers to the family in memory of Harold Greenwood, please visit our flower store.
Send a Sympathy Card