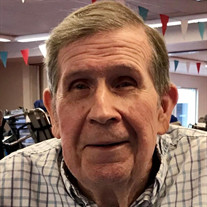 A private graveside service will be held at Park Hill Cemetery in Bloomington. Kibler-Brady-Ruestman Memorial Home is assisting the family with arrangements.

Surviving are his children, Gary (Catherine) Wilcoxson and Pamela (Fred) Scheel, both of Bloomington; a granddaughter, Ashley (Josh) Turley of Bloomington; two great grandchildren, Everett and Audrey, and three siblings, Wanda Henson, Joyce Kelly, and Frank Wilcoxson all of Kentucky.

Herman was employed at General Electric in Bloomington for 38 years, retiring in 1993. He proudly served in the United States Army during the Korean War.

Herman enjoyed music and was part of the local band Willie Wills and the Rhythm Riders.

To send flowers to the family or plant a tree in memory of Herman E. Wilcoxson, please visit our floral store.

To send flowers to the family in memory of Herman Wilcoxson, please visit our flower store.
Send a Sympathy Card