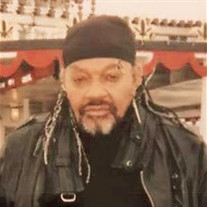 Tuesday, May 24, 2018 as the angels circled the ceiling at Advocate Bromenn surrounded by family Jack patiently waited for his best friend LeRoy to arrive he quietly took a angels hand and went to join his parents.
We want to thank God for the union of Echmel Jack in Gibson and Viola Mary Nickerson Gibson. To this union Jack Gibson Jr. was born on August 18, 1950 in Lake Charles LA, he was one of three siblings that were truly bonded as children you didn't see one with out the other.
Jack attended school in Texas, and after moving to Bloomington, IL in 1989 he graduated from U High in Normal, IL.
He married Debbie Gibson and to that union there was 5 children.
Shortly after graduation Jack began to work at the Eureka Co. where he was a member of the Machinist Lodge 1000 and later worked for the Bloomington YWCA until he retired.
Jack was a very private man that loved life and lived it his way, he liked to fish and hunt, was a collector of swords but his passion was body building.
Jack accepted Jesus Christ as his personal Savior.
He leaves to cherish his memory Bother and best friend Brother LeRoy (Tonya)Gibson ;Sister Pippa Joyce Gibson Palmer 3 sons Jack Jr., Jason and Court: 2 daughters Clara and Alicia; 9 grandchildren and 3 nephews which he raised as his sons Cory, Mozel and Gerald.


To send flowers to the family or plant a tree in memory of Jack Gibson, please visit our floral store.

To send flowers to the family in memory of Jack Gibson, please visit our flower store.