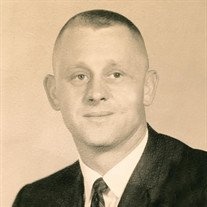 Green Valley, AZ - James R. "Ron" Beales, 89, of Green Valley, AZ, formerly of Bloomington, passed away at 6:20 p.m. on Sunday, April 28, 2019 at Cannon Valley Care Center in Green Valley, AZ.
His Mass of Christian Burial will be at 10:00 a.m. on Monday, May 6, 2019 at Holy Trinity Catholic Church in Bloomington with Fr. Jeffrey Stirniman officiating. Visitation will be from 9-10:00 a.m. prior to mass at the church. Military Rites will be conducted by the Bloomington-Normal American Legion Honor Guard.
Interment will be in Holy Cross Cemetery in Normal. Memorials may be directed to a charity of the donor's choice. Kibler-Brady-Ruestman Memorial Home in Bloomington is assisting the family with arrangements.
Ron was born on October 3, 1929 in Chicago, Illinois, a son to Harold J. and Anna J. Kordyak Beales. He married Mary K. Murray on August 10, 1957, in Bloomington. Ron and Mary were married for 55 years when she preceded him in death on August 12, 2012.
Surviving is his brother in-law, Martin J. Wieland D.D.S. of Bloomington and many friends, former students and athletes.
He was preceded in death by his parents.
Ron graduated from Illinois State Normal University, where he was inducted into the ISU Athletics Percy Family Hall of Fame in 1977. He played football (1948-50), men's track and field (1950-51) and was a member of the wrestling team in 1951. Ron was a three sport letterman in football, wrestling and track and field. He was voted to the Tom Harmon's Little All-American Football team as the center on the 1950 undefeated National Championship Team. He was All-Conference on both offense and defense, and was C-Captain of the 1951 squad.
After graduation and completing his Masters degree in Education, Ron taught and coached in several locations.
He served as head football and wrestling coach at Corona High School in Corona, California and later he served as head wrestling coach and assistant football coach for two years at University of New Hampshire.
Ron proudly served his country in the United States Marine Corp. during the Occupation of Japan and the United States Army as a M.P.
He was an outstanding teacher, coach, husband and friend to all he knew.
Online condolences and memories of Ron may be shared with the family at kiblerbradyruestman.com.


To send flowers to the family or plant a tree in memory of James R. "Ron" Beales, please visit our floral store.

To send flowers to the family in memory of James Beales, please visit our flower store.