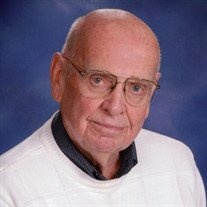 His funeral service will be at 11:00 a.m. on Friday, March 20, 2020 at Kibler-Brady-Ruestman Memorial Home in Bloomington with Pastor Billy Newell officiating. Visitation will be held one hour prior to the service at the memorial home.

Interment will be at Park Hill Cemetery in Bloomington. Memorials may be directed to the family.

He was preceded in death by his parents, wife, and his sister Mary Ellen Winstead.

James enjoyed traveling, playing golf at Highland Park Golf Course in Bloomington, and skating at Four Seasons. He ran the Anglers Club and enjoyed fishing. James witnessed the historic game where Eddie Gaedel, known as the smallest player in baseball history, batted for the St. Louis Browns in 1951. He was close friends and like a big brother to the singer Joe Dowell.

James proudly served his country in the United States Air Force. He retired from commercial sales with the Pantagraph after working there for thirty years. James was a lifetime long member of Trinity Lutheran church in Bloomington and a member of the American Legion Carl Martin Post #635 in Normal.

The family would like to extend a special thank you to the Heritage Health in Normal for their care and compassion.


To send flowers to the family or plant a tree in memory of James R. Dunn, please visit our floral store.

Please click here to view the video tribute
To send flowers to the family in memory of James Dunn, please visit our flower store.
Send a Sympathy Card