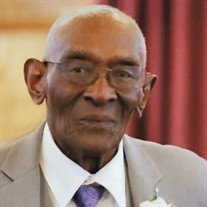 His funeral service will be held on Tuesday, December 22, 2020, at 11 a.m. at Union Missionary Baptist Church, Bloomington, Illinois. Pastor U.D. Williams will be officiating. Due to Covid restrictions, service will be limited to immediate family members only. Those wishing to view the service may do so at umbchurch.org.

Interment will be at Evergreen Memorial Cemetery in Bloomington.
James was born on December 17, 1923, in Frenchmans Bayou, Arkansas, to Henry and Rosie (Dearing) Johnson. He married Pearl Lee Wilford on June 2, 1946, in Frenchman Bayou, Arkansas. They later moved to Bloomington, Illinois, in 1964, making it their home. She preceded him in death.

He accepted Christ at an early age at First Baptist Church in Frenchmans Bayou, Arkansas. He joined Union Missionary Baptist Church in 1964. He was very active in the Deacon ministry; the Senior Choir; and served as the church treasurer. James loved to sing and was a member of several quartet groups.

He was a World War II Veteran serving in the Philippines. He received four Bronze Stars. He was a lifetime member of the Masonic Lodge serving in the past as the Worshipful Master.

He worked as a Dish Room Supervisor at Illinois State University in Normal, Illinois, retiring after 29 years of service.

He was preceded in death by his wife of 59½ years; his parents; one daughter, Emma Edwards; one granddaughter, Miranda Johnson; four sisters; and four brothers.

Memorial contributions may be left to the Alzheimer's Association in lieu of flowers.

Kibler-Brady-Ruestman Memorial Home in Bloomington is in charge of the arrangements.

To send flowers to the family or plant a tree in memory of James Johnson, please visit our floral store.

To send flowers to the family in memory of James Johnson, please visit our flower store.
Send a Sympathy Card