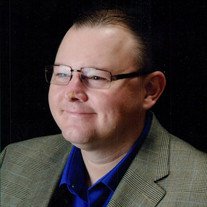 Hudson - James T. "Jay" Laskowski, 47, of Hudson passed away at 6:10 p.m. on Wednesday, May 24, 2017 at his home.
His Celebration of Life will be held at 2:00 p.m. on Saturday, June 10, 2017 at the Local 99 Plumbers and Pipefitters Hall in Bloomington. Full Military Rites will be accorded by the Bloomington-Normal American Legion Honor Guard. Kibler-Brady Ruestman Memorial Home in Bloomington is assisting the family with arrangements.
A private family inurnment will be held at Rock Island National Cemetery in Rock Island Arsenal. Memorials may be made to the American Legion Post 635.
Jay was born on June 30, 1969 in Urbana, Illinois, a son to Tom Laskowski and Linda Riordan. He married Meliza Page on July 19, 1991 in Germany.
Surviving is his wife, Meliza Laskowski of Hudson; daughter, Lauren (Josh) Hussemann of El Paso; grandchildren, Kyle and Miah Hussemann both of El Paso; mother, Linda (Todd) Riordan of Clinton; father, Tom (Murleen) Laskowski of Bloomington; Brother, Todd Laskowski of Bloomington; maternal grandmother, Marilee Evans of Normal; also surviving are numerous aunts, uncles, and cousins. Jay loved his beloved dogs, Mallory "Moo Moo", his bud, Rufus and the princess, Dixie.
He was preceded in death by his maternal grandfather, Hugh Evans; his paternal grandmother, Flossie Moore; paternal grandfather, Jesse Laskowski and paternal uncles, Terry Laskowski and Ronnie Laskowski.
Jay was a veteran of the United States Army, where he proudly served during the Gulf War and Desert Storm. Jay was a member of the American Legion Post 635, the Normal Masonic Lodge #673, and Local 99 Plumbers and Pipefitters.
He loved music, history and fine films, such as ‘Big Trouble in Little China' and he was an ‘aspiring comedian'.
Jay was a loving husband, father, grandfather, son, brother and friend and he will be greatly missed.


To send flowers to the family or plant a tree in memory of James T. "Jay" Laskowski, please visit our floral store.

Please click here to view the video tribute
To send flowers to the family in memory of James Laskowski, please visit our flower store.
Send a Sympathy Card