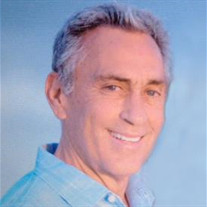 His memorial service will be at 1:00 p.m. on Saturday, November 5, 2016 at Eastview Christian Church in Normal, Illinois with Rev. Mark Warren officiating. Visitation will be from 5-8:00 p.m. on Friday at Kibler-Brady-Ruestman Memorial Home in Bloomington.

Memorials may be made in Jim's name to the Bloomington-Normal YMCA.

Jim was born on November 21, 1950 in Washington, Iowa, a son to Shrum and Lillian Bell Lewis. He married Michelle A. Huddleston on November 20, 2015 in Sanibel Island, Florida.

He was preceded in death by his parents and stepfather, Leonard Tindal.

Jim was born and raised in Washington, Iowa where he graduated from Washington High School, and then graduated from Drake University in Des Moines, Iowa. He later moved to Bloomington and worked in the insurance field and most recently worked with Berkshire Hathaway Insurance Company.

He enjoyed golfing, his membership at the Bloomington-Normal YMCA, and shelling on his trips to Sanibel Island. He was an avid Iowa Hawkeye, Green Bay Packers and Chicago Cubs fan. He loved music and especially James Taylor.

Jim will be greatly missed by his wife, family, friends and man's best friend, Z.


To send flowers to the family or plant a tree in memory of James "Jim" A. Lewis, please visit our floral store.

Please click here to view the video tribute
To send flowers to the family in memory of James Lewis, please visit our flower store.