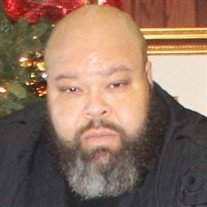 James was born on October 23, 1975 in Chicago, Illinois, the son of James and Ester Martin. He attended elementary school in Chicago, Illinois, but transitioned with his family to Bloomington, Illinois for high school. While attending Bloomington High School, he met life-long friends as a member of the football, wrestling and track teams. It was during his time on the football team that he secured a full scholarship to Grambling State University under the leadership of Coach Eddie Robinson.

James favorite pastimes were coaching the little league football team that his sons played on, gaming with family and friends across the states, and working on his collection of trucks and old-school cars. He was introduced to technology by his father at a very young age. Together they built computers, robots and renovated the family home time and time again. These same skills were passed from James to his sons who are just as passionate as he was about computers, cars and tools.

James was affectionally known as ‘Big Ride' or ‘Security' for the services he provided at multiple functions. To his immediate family, ‘Tio' was the childhood name that stuck with him through his life. He often referred to himself as the ‘Black Sheep', reflecting his strong and unwavering views on life. His enormous stature was matched by his huge heart, contagious smile and hearty laugh. He ended every phrase with ‘straight up Joe' when he really wanted to make a point.

James was a single father to his three youngest children and fought to stay engaged in the life of all his kids. His fights were long and hard but are over now. His sisters will now carry the torch. He was their brother, their protector and best friend. They will ensure that the remaining desires of his heart, which he shared openly, are fulfilled - ‘STRAIGHT UP JOE'.

He was preceded in death by his maternal and paternal grandparents, and his second mother & aunt, Priscilla Hall.

He is survived by his spiritual children, Ariella Martin and Aja Martin, his sons, James ‘Bubba' Martin, Jakobi Martin, Semaj Saint Martin and Josiah Artese Martin, and his daughter, Jada Simone Martin; his parents, his brother, Germondo Hall, his sisters, Janeia Martin and Erica (Marsean) Campbell, his nieces, J'adore Martin and Ja'nia Martin, and his nephew, C. J. Ware, and a hosts of aunts, uncles, cousins, and friends.

To send flowers to the family or plant a tree in memory of James I Martin, please visit our floral store.

To send flowers to the family in memory of James Martin, please visit our flower store.