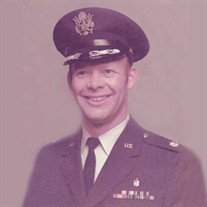 His graveside service will be at 1:00 p.m. on Saturday, May 20, 2017 in Park Lawn Cemetery in Danvers where he will be interred next to his wife of 57 years, Barbara. The family encourages casual dress. Full Military Rites will be accorded. Kibler-Brady-Ruestman Memorial Home in Bloomington is assisting the family with arrangements.

Memorials may be made to Illinois Cancer Care or American Cancer Society or a charity of the donor's choice.

Moving at age six to the small, northern Illinois community of Sycamore where he attended schools from first grade through high school. Following high school, Jim attended Grinnell College earning a Bachelor of Arts, majoring in Chemistry-Zoology. Next he attended the University of Illinois where he received Bachelor and Doctor of Dental Surgery degrees in 1957.

Jim then received a First Lieutenant's commission in the United States Air Force where he proudly served for twenty years as a dentist, retiring as a Colonel. The Air Force career enabled him to travel extensively in much of the world from Aisla to the Arctic Circle. Subsequently he practiced dentistry in Boulder, CO and Urbana, IL. Jim also provided missionary dental treatment in Jamaica.

He was a member of the American Dental Association. Though his vocation was dentistry, his avocation was aviation having obtained a commercial pilot's license with an added sea plane and instrument ratings. In Alaska, Jim enjoyed wilderness flying and took hunters, fishermen and sightseers to remote areas that could only be reached by airplane. In route to dental meetings and on vacations, he flew his personal plane to every state except Hawaii. He was also a LifeLine pilot, taking emergency patients to surgical centers.

Jim's church was often the great outdoors where he communed with God by contemplating the wonder of His creations in nature and the world. He thought God to be a superior Pastor. Poems by Emily Dickinson's, ‘Some Keep The Sabbath' and Joyce Kilmer's ‘Trees' perfectly reflect Jim's feelings.


To send flowers to the family or plant a tree in memory of James "Jim" Earl Phelps, Jr., please visit our floral store.

To send flowers to the family in memory of James Phelps, Jr., please visit our flower store.