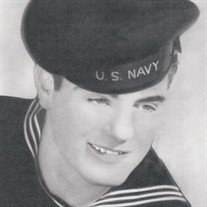 A private, family graveside service will be held and a public celebration of life will be held at a later date. Kibler-Brady-Ruestman Memorial Home in Bloomington is assisting the family with arrangements.

Interment will be at Park Hill Cemetery in Bloomington. In lieu of flowers, memorials may be directed to Transitions Hospice.

He was preceded in death by his parents, wife, two brothers, two sisters, and a granddaughter.

James proudly served his country in the United States Navy during World War II. He flew combat missions in over the Atlantic as an Aviation Radioman 3rd Class on TBF/Avenger torpedo planes.

To send flowers to the family or plant a tree in memory of James H. Watson, please visit our floral store.

To send flowers to the family in memory of James Watson, please visit our flower store.
Send a Sympathy Card