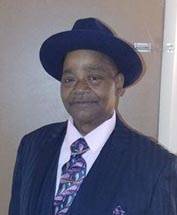 On August 22, 1955, in Meridian, Mississippi, Lucinda and Eloise Grant welcomed John into this world. John was the youngest of seven children, born to this union and his parents preceded him in death.

John was a fun-loving spirit. Growing up John attended Wentworth Elementary and Chicago Vocational High School in Chicago. In 1979, John met Ida and her three-month-old daughter. They were united in holy matrimony in August of 1985 and their union welcomed his oldest daughter, Owna, and his baby girl Eboni, in August of 1989.

John was a devoted hardworking father who loved his family tremendously. He believed in providing and supporting his family, which meant taking on various jobs/trades over the course of fifty years. John was skilled in areas such as construction, restaurant management, and auto mechanics. John loved to entertain, cook meals for family and friends, play card games, and dancing (stepping) and watching his favorite sports team play (the Green Bay Packers!!)

John taught his family the importance of love, prayer, and togetherness. He attended New Hope Missionary Baptist Church where he received Christ.

To send flowers to the family or plant a tree in memory of John Lloyd Grant, please visit our floral store.

To send flowers to the family in memory of John Grant, please visit our flower store.
Send a Sympathy Card