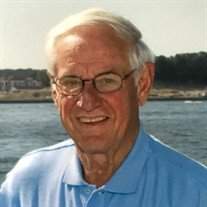 A memorial service will be held at 11:00 a.m. on Friday, January 24, 2020, at Trinity Lutheran Church, 801 S. Madison, Bloomington, with Pastor Chuck Bahn officiating. Military rites will be accorded by the Bloomington-Normal American Legion Honor Guard. A visitation will be held on Thursday, January 23, 2020, from 4:00-7:00 p.m. at the church and also one hour prior to the service on Friday. Kibler-Brady-Ruestman Memorial Home is assisting with arrangements.

Memorials may be made to the Trinity Lutheran Church Cornerstone Building Fund or to a charity of the donor's choice.

Joe was born on April 16, 1932, in Alton, IL, son of Leonard and LaVerne (Tuscher) Elble. He married Shirley Duelm on September 11, 1955, at Messiah Lutheran Church in Alton.

After completing high school, Joe was drafted by the Giants and played professional baseball before beginning his service to his country in the United States Army. Returning to Alton, Joe began his career as a homebuilder and married the love of his life, Shirley. Joe's career later brought him to Bloomington where he worked as a builder and contractor before culminating his building career at Baumgart Building Center.

Joe was a member and former Elder at Trinity Lutheran Church. He was an avid woodworker and fisherman, loved puzzles and bingo and most importantly he loved spending time with his boys, grandchildren and great-grandchildren. Joe's primary goal in life was to make someone smile every day.


To send flowers to the family or plant a tree in memory of Joseph B. Elble, please visit our floral store.

Please click here to view the video tribute
To send flowers to the family in memory of Joseph Elble, please visit our flower store.