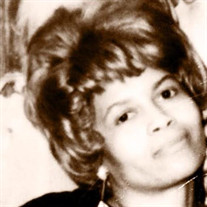 The family celebrates the life of Josephine "Jo" Mazique Hosea, 92, who entered into eternal peace on Saturday, November 23, 2019, at her home surrounded by family.

Jo was born on March 23, 1927 in Schlater, Mississippi, a daughter and only child to William and Hattie Mazique. After her father passed away when Jo was young, her mother married Arthur Moore, who helped raise her from the tender age of ten. Jo met her future husband, Lawrence ("LJ") Hosea, when she was in her early teens and they married on May 11, 1947 in Bloomington.

Living in the South was very hard for blacks; Jo had to grow up at a very young age. She was often called on to read materials for adult family members and neighbors who could not read. In 1938, Arthur and Hattie found jobs in a home located on the Chicago North Shore -- the family left the South for good. Jo and her family likely did not realize they were a part of making history until it was over -- it is estimated that about five million southern blacks relocated to the North and West between 1915 and 1960 as part of what is now known as The Great Migration.

Because their employer had no room for a child, Jo had to move to Bloomington where her grandmother, Irene "Big Mama" Reed, worked as a live-in housekeeper. At the time, Jo's first cousin, Cleo, resided with Big Mama. Unfortunately, Jo could not live with them so she lived in the home of Mrs. Bacon, a lady who took in children boarders during the migration. Jo spoke often about her time with Mrs. Bacon and was fond of the nickname she gave her, Thang. Jo stayed with Mrs. Bacon for almost a year until her grandmother saved enough money to buy a home. Jo and her first cousin, Cleo, were very close -- they were raised in Big Mama's home like sisters for a few years until their parents could save enough money to relocate to Bloomington.

Jo attended Bloomington High School. During her early high school years, she and her best friend, Melba Moore, and a few other black BHS classmates went into the local Kresge's Five & Dime and sat at the "For Whites Only" lunch counter -- they demanded to be served. When told they would not be served, Jo and her friends refused to leave until they were served. While they had not planned to stage a sit-in, Jo shared that she was simply tired of segregation. For a short time, she and Melba sang during commercial breaks at WJBC. They were offered the jobs the same day they sang at the station with a local choir.

With great pride and joy, Jo worked as a full-time homemaker. She was a kind and gentle person with a loving and generous heart. Jo was always a good friend and confidant to others. She also loved to dance and sing around the house.

Though Jo is gone, she will never be forgotten. She was preceded in death by her parents, husband, and three children, Loretta Kinerd, Joann Smith, and Lawrence Mazique.

In lieu of flowers, memorial contributions may be made to the Arthritis Foundation (www.arthritis.org).

To send flowers to the family or plant a tree in memory of Josephine Mazique-Hosea, please visit our floral store.

Please click here to view the video tribute
To send flowers to the family in memory of Josephine Mazique-Hosea, please visit our flower store.