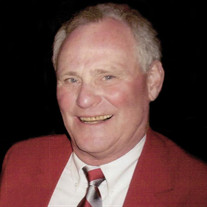 His Celebration of Life will be at 12:00 p.m. noon on Friday, April 21, 2017 in Evelyn Chapel at Illinois Wesleyan University in Bloomington with Rev. Vaughn Hoffman officiating. Visitation will be from 10:00 a.m.-12:00 p.m. prior to the service at the church. Cremation rites have been accorded. Kibler-Brady-Ruestman Memorial Home in Bloomington is assisting the family with arrangements.

Memorials may be made to Illinois Wesleyan University or Timber Pointe Charitable Foundation.

Ken was born on May 28, 1944 in St. Louis, Missouri, the only child of Arthur L. ‘Lyn' and Elsie Ethel Kimmel Browning. He married Jane Ann Stauss in 1968. They had two children, later divorced. Happily married to Carol Williams Browning since 1989.

Ken was raised in Rolla, Missouri, and graduated from Rolla High School in 1962. He was active in Scouting, attaining the rank of Eagle Scout, received Vigil Honor in Order of the Arrow and served as Lodge Chief.

He graduated from Massachusetts Institute of Technology in Cambridge, Massachusetts with a degree in Aeronautics and Astronautics in 1966, served as Class President for three years , was a member of Sigma Alpha Epsilon and received his Master's degree in Management from MIT in 1968.

Ken spent his career in higher education because of his affection for young people and his desire to enhance their college experiences. He worked at MIT from 1968-1978 as Associate Dean for Student Affairs and at Grinnell College in Grinnell, Iowa from 1978-1980 as Vice Provost. In 1981, he was Business Manager at Illinois Wesleyan University in Bloomington and retired in 2004 as Vice President for Business and Finance.
He was most proud of his role in building much of Wesleyan campus, including Evelyn Chapel, Shirk Center and Athletic Fields, The Ames Library, Hansen Center, Center for Natural Sciences, Central for Liberal Arts, Rust House, Sigma Chi house and gateways on Empire Street and Emerson Street as well as renovations to most other campus buildings.

Ken supported youth activities as a Boy Scout leader, a coach for Legion and Pony baseball, boys and girls soccer and served on the committees for baseball and soccer. He was also an active member of the Timber Pointe Charitable Foundation.

Although Ken was raised an Episcopalian, he joined Second Presbyterian Church and while active for only a short time, his life transformed for it was there that he met the love of his life, Carol.

Ken and Carol bought a cottage at Lake Bloomington in 1999 and moved there permanently a few years later. They were actively involved in the Lake Bloomington Association where Ken served as president for three years and undertook several other projects to serve the association and the lake community. They moved back to Bloomington in 2013.

He enjoyed activities with their eleven grandkids, golfing, sailing and canoeing and was an avid fan of Illinois Wesleyan Titan basketball. Ken loved the outdoors and when his children were younger, imbued them with this same love and skills through wilderness camping and canoeing, including a trip to the Boundary Waters.


To send flowers to the family or plant a tree in memory of Kenneth Browning, please visit our floral store.

To send flowers to the family in memory of Kenneth Browning, please visit our flower store.