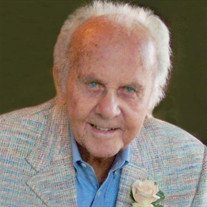 Normal - Kenneth L. "Ken" Schroeder, 96, of Normal, passed away on Wednesday, January 10, 2018, after a brief hospitalization in Atlanta.

His funeral service will be held at 11:00 a.m. on Tuesday, January 23, 2018 at Christ Lutheran Church in Normal with Pastor Jonathan Huehn and Pastor Timothy Fitzner officiating. Visitation will be one hour prior to the service at the church. Full Military Rites will be accorded by the Bloomington-Normal American Legion Honor Guard. Kibler-Brady-Ruestman Memorial Home in Bloomington is assisting the family with arrangements.

A private entombment will be at East Lawn Mausoleum in Bloomington.

He was also preceded in death by his parents and a sister, Winona Kott.

Ken proudly served in the United States Army during WWII with the 1st Calvary Division as Troop Commander of G. Troup, 8th Regiment, in the Philippines and Japan. In 1952, Ken returned to service during the Korean War with 44th Illinois National Guard Division, as a Battery Commander, 144th AA Artillery Battalion.

He graduated from the University of Illinois with a Bachelor's degree in banking and finance. He worked for State Farm Fire and Casualty Company for over 39 years, serving as vice president and treasurer and also as reinsurance vice president.

Ken was elected twice and served as Normal Town Councilman, 1968-1976. He was also active in Republican politics as Precinct Committeeman and Deputy McLean County Chairman in the 1960's and 70's.

After retiring, he volunteered as a trustee on the Board of the Bloomington-Normal Water Reclamation District for 32 years, 19 of them as Board President. In 2006, the BNWRD honored Ken's leadership by naming its 200-acre wetlands restoration the Kenneth L. Schroeder Wildlife Sanctuary.

He was an avid golfer with two holes-in-one, an enthusiastic fisherman, an accomplished bridge player, a master of oatmeal-raisin cookies, the originator of the Longevity Cocktail, and a respected advisor to his family and friends.

Memorials may be made to Christ Lutheran Church of Normal.


To send flowers to the family or plant a tree in memory of Kenneth "Ken" L. Schroeder, please visit our floral store.

To send flowers to the family in memory of Kenneth Schroeder, please visit our flower store.