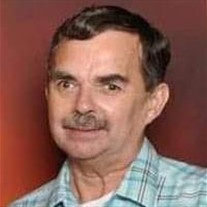 His memorial service will be held at 11:00 a.m., Thursday, March 28, 2019 at Trinity Lutheran Church in Bloomington, with Pastor Terry Strom officiating. Visitation will be held one hour prior to the memorial service at the church. Memorials may be directed to American Cancer Society or OSF Richard L. Owens Hospice Home in Peoria. Kibler-Brady-Ruestman Memorial Home is assisting the family with arrangements.

Larry was born on December 22, 1951 in Streator, the son of Mel N. and Betty M. Lehman Jennings. He married Doris Thompson on October 1, 1971 at Trinity Evangelical Lutheran Church in Pontiac.

He was preceded in death by his parents; a brother, Ronald and a sister, Cindy.

He collected coins and guns and enjoyed camping, fishing, and traveling. He especially enjoyed spending time with his family.

Larry was a loving husband, father, and grandfather. He will be greatly missed.


To send flowers to the family or plant a tree in memory of Larry David Jennings, please visit our floral store.

To send flowers to the family in memory of Larry Jennings, please visit our flower store.