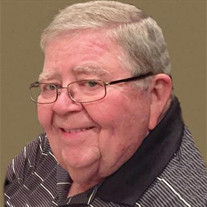 Larry Johnson, 75, of Sun City West, Ariz., formerly of Bloomington, passed away Nov. 30, 2017, in Peoria, Ariz.
He was born March 29, 1942, in Omaha, Neb., to Rayfield and Leona Johnson.
Larry graduated from Holy Name High School in 1960. After high school he attended the University of Nebraska-Omaha and served as a sergeant in the Air Force National Guard in Lincoln, Neb.
He worked for State Farm Insurance for 37 years, retiring on Jan. 1, 2001. In retirement, he volunteered as treasurer for the David Davis Mansion Foundation and at Del Webb Medical Center and traveled coast to coast seeing family and friends.
In 1965, Larry married his high school best friend Patricia O'Brien in Omaha, Neb. They were happily married for 52 years. Larry was a founding member of the Bloomington-Normal chapter of The Compassionate Friends, advocating for families who lost children. He enjoyed golfing, boating, driving his Mustangs, swim meets, and most of all spending time with family.
Larry is survived by his spouse, Patricia Johnson, Sun City West, Ariz.; his son, Eric (Julie) Johnson, Bloomington, and Patrick Johnson, Phoenix, Ariz.; and his beloved grandchildren, Ava, Isaac and Riley. He is also survived by his brothers, Bob (Brenda), Mick (Arlene), and Dan, and many nieces and nephews.
Larry was preceded in death by his parents and his son, Cory.
A Memorial Mass was held at Our Lady of Lourdes in Sun City West, followed by a cremation. A funeral Mass will be at 10:30 a.m. Jan. 3 at St. Patrick Catholic Church of Merna, 1001 N. Towanda Barnes Road, Bloomington. He will be laid to rest with his son Cory at Holy Cross Cemetery, Normal.
In lieu of flowers, the family requests memorial donations be made to the Arthritis Foundation, 1355 Peachtree St. NE, Suite 600, Atlanta, GA 30309, www.arthritis.org, or The Compassionate Friends, Bloomington-Normal Chapter, 1617 E. Emerson St., Bloomington, IL 61701-2008.
Larry was a loving husband, father, brother, uncle and friend. He was the best "Papa" ever to Ava, Isaac and Riley, and will be greatly missed.

To send flowers to the family or plant a tree in memory of Larry L. Johnson, please visit our floral store.

To send flowers to the family in memory of Larry Johnson, please visit our flower store.
Send a Sympathy Card