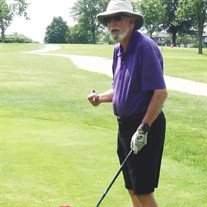 Normal - Larry Johnson, 75, of Normal, died at OSF St. Joseph Medical Center in Bloomington on Friday, October 13, 2017 at 8:28 p.m. peacefully surrounded by his family. He was an ace golfer, avid Cubs fan, an awesome husband, dad, and grandpa. He was a loyal friend to many, and wonderful Christian man.
Funeral service will be at 11:00 a.m. on Saturday, October 21, 2017 at Kibler-Brady-Ruestman Memorial Home in Bloomington. Visitation will be from 9:00-11:00 a.m. prior to services at the funeral home. Pastor Brent Salm will officiate. A private family interment will be in Calvary Cemetery, Henry.
Larry was born on January 27, 1942 in Peoria, Illinois, a son to John and Mabel Belcner Johnson. He began his life as a farm boy in rural Marshall County, where he grew up hunting pheasant, baling hay, driving tractors, and respecting family. Larry was a drummer in the Lacon High School Band, and passed his musical talents down to his children.
If you have ever played at the El Paso Golf Course, you have probably heard Larry yell, "Get Up" to the ball while he hit it toward the green. Golf was his passion. In his lifetime, Larry hit a hole-in-one four different times. He also stocked his shelves with numerous golf trophies and golfed in many states with his golfing buddies.
As a young man, Larry progressed through several jobs such as; plumber's assistant, hay baler, and assembly line worker. His big break was being employed at Caterpillar Tractor Company. In his mid-20s, Larry started as an apprentice and worked his way to Purchasing Manager. He did extensive traveling for Caterpillar, buying equipment. Larry had a post retirement business for 10 years as an independent contractor doing work for major moving companies.
His lovely wife, Judy (Neuhalfen) Johnson, who survives him, was raised on a farm near Henry, Illinois. She supported Larry's love of golf and family. She met Larry at a square dance, and they have stayed close together ever since.
Larry is also survived by his sister, LaVeta (Clifford) Gill, of rural Mashall County. Larry has three sons surviving him; Cliff (Winny) Johnson, of Morris, Clay (Lisa) Johnson, of Bloomington, Kevin (fiancée Sasha) Johnson, of Santa Rosa, California, and stepson, Craig (Katie) Bowars, of Bloomington. Larry's grandchildren will miss him so much; Kimberly (Tyler) Painter, Caden Bowars, Chloe Bowars, Lucas McVey, and Logan McVey.
Larry was preceded in death by his parents and his stepdaughter, Michelle Bowars.


To send flowers to the family or plant a tree in memory of Lawrence "Larry" E. Johnson, please visit our floral store.

Please click here to view the video tribute
To send flowers to the family in memory of Lawrence Johnson, please visit our flower store.