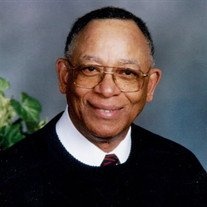 Bloomington - Lewis Alfonso Garrison, 82, of Bloomington passed away Sunday, November 12, 2017, at Heritage Health, Bloomington.
A Requiem Mass will be held at 11am on Saturday, December 2, 2017, at St. Matthew's Episcopal Church in Bloomington with Fr. David Halt officiating. Cremation rites have been accorded. Visitation will be at 10 am on Saturday, prior to mass at the church. Kibler-Brady-Ruestman Memorial Home in Bloomington is assisting the family with arrangements.
Lewis was born on April 13, 1935 in Chicago, Illinois, the son of Louis and Carrie (Winston) Garrison. He married Theresa Cumby on May 24, 1956 in Danville, Illinois.
He is survived by his loving wife, Theresa Garrison of Bloomington; son, Todd (Mark Webb) of Elkridge, MD and several nieces, nephews and cousins.
He was preceded in death by his parents; sisters, Harriette Pearson and Marilyn Washington; and a brother, Arthur Garrison.
The family moved to Bloomington, Illinois in 1939, where he attended Bloomington schools. After graduating from Bloomington High School, Lewis attended Lincoln Junior College. He later proudly served in the United States Navy for 4 years.
After serving an apprenticeship under his father in Garrison's Plumbing and Heating Company, Lewis joined the Plumbers and Pipefitters Local 99. He continued that membership for 60 years, and taught in the Union's apprentice program for many years.
Lewis was a life-long student, and upon retirement, enrolled in the American College of Technology, where he studied computer-aided design. He enjoyed watercolor painting classes and the art of photography. Golf was a favorite pastime; he studied the intricacies of the sport, often playing with the Bloomington Seniors as well as the Bloomington Drivers.
A longtime member of St. Matthew's Episcopal Church, Lewis served there on the vestry and Building and Grounds committee.
Memorials may be made to St. Matthew's Episcopal Church or the American Diabetes Association.

To send flowers to the family or plant a tree in memory of Lewis Alfonso Garrison, please visit our floral store.

Please click here to view the video tribute
To send flowers to the family in memory of Lewis Garrison, please visit our flower store.