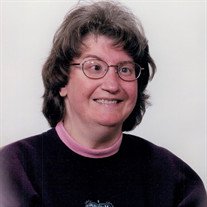 Her funeral service will be held at 11:00 a.m. on Monday, July 29, 2019 at Trinity Lutheran Church in Bloomington with Pastor Billy Newell officiating. Visitation will be held from 10:00 a.m. until the time of the service at church. Kibler-Brady-Ruestman Memorial Home in Bloomington is assisting the family with services.

Interment will be at Park Hill Cemetery in Bloomington. Memorials may be directed to Marcfirst, OSF Hospice, Trinity Lutheran Church, or the donor's choice.

Lisa was born December 4, 1957 in Bloomington, a daughter to Clarence Warren and Shirley Ann (Simpsen) Cumpston.

She was preceded in death by her grandparents and sister-in-law, Cindy Cumpston.

Lisa was a member of Trinity Lutheran Church and participated in Best Buddies and Friendsfirst through Marcfirst. She loved to read, write, color, and paint. She especially loved to paint butterflies. Being outside in the sunshine was one of her favorite things to do. She had a love of music, but she lost her hearing at age 18. Although she faced many challenges in her life and was severely handicapped, and later became paralyzed, she never let that define who she was. She loved her family dearly and would light up whenever she spent time with them. Lisa was also known for never forgetting anybody's birthday or anniversary.

Her family would like to give special thanks to Marcfirst and OSF Hospice for the exceptional care and love shown to Lisa. With this care she was able to remain in her home until she went to be with our Heavenly Father.


To send flowers to the family or plant a tree in memory of Lisa Jill Cumpston, please visit our floral store.

Please click here to view the video tribute
To send flowers to the family in memory of Lisa Cumpston, please visit our flower store.