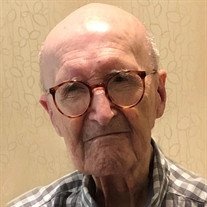 Lloyd Combs (98) passed away at Martin Health Center in Bloomington on Sunday, January 24, 2021. He had been a resident there for over three years and his family is grateful for the wonderful care the nurses, aides, and staff members provided. In addition, Carle Bro-Men Hospice compassionately facilitated his end-of-life needs. Based on Covid safety precautions private arrangements are being handled by Kibler-Brady-Ruestman Memorial Home in Bloomington.

Lloyd was born at home in Saunemin, Illinois on November 15, 1922, the son of Scott and Daisy (Brittain) Combs. He was one of nine children (three boys and six girls) and his parents and all of his siblings predeceased him.

He married Aldine Margaret Zimmerman on September 1, 1956; she survives. Their 64+ years of marriage were remarkably happy. They both loved to read and spend vacation time in Florida. They lead a quiet life and especially enjoyed spending time with Aldine's sisters, her twin Kathleen Kaufmann and younger sister, Verna Ruth Zimmerman. Lloyd and Aldine were devoted to each other and their beloved Mennonite Church of Normal.

Lloyd grew up in Saunemin IL and graduated from Saunemin High School in 1941. December 7, 1941 was a turning point in his life. He and his brother Ira worked at the Wilmington Munitions Plant where 104 millimeter shells were made for the war effort. He said the plant was in a wooden building with heat provided by a pot-bellied stove. His job as a timekeeper required him, a man who didn't like heights, to walk on the overhead wooden path. He worked the day shift there for four years until the War was over. During that time there was an explosion during the night shift and he recalled with great sadness that 28 people were killed.

Following the war there were no jobs in Saunemin so he answered an ad in The Daily Pantagraph for a bookkeeping position at their main office in Bloomington. He had no education or experience as a bookkeeper but he possessed a keen aptitude for numbers and a willingness to learn and to work hard. After being hired in February, 1946 he fondly recalled that every day they would bring things in for him to do and they would say "this is part of your job too." A testament to the smart and loyal employee he was, he retired in 1984 as Chief Operating Officer. By this time The San Francisco Chronicle had purchased The Pantagraph and they retained Lloyd's services as a consultant for an additional four years.

He was an exceptionally humble man and once commented that he hadn't done anything remarkable in his life. His family gently reminded him that his career itself was extraordinary.

Three nieces and their husbands regularly visited their "Uncle Lloyd and Aunt Aldine" at Westminster Village. He had a phenomenal memory and during the past three years shared wonderful childhood stories of his life in Saunemin with his mom and siblings. His father died when he was two and his mother heroically raised nine children during the Great Depression. He lovingly talked about his mother and his memories inevitably brought tears to his eyes.

He was a Master Mason of Bloomington Masonic Lodge #43 A.F & A.M.
Private burial will be at Mennonite Church of Normal Ropp Cemetery.

To send flowers to the family or plant a tree in memory of Lloyd Scott Combs, please visit our floral store.

To send flowers to the family in memory of Lloyd Combs, please visit our flower store.