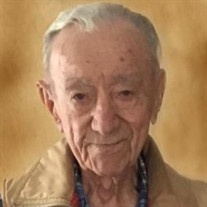 His funeral service will be at 11:00 a.m. on Friday, March 13, 2020, at Trinity Lutheran Church in Bloomington with Pastor Chuck Bahn officiating. Visitation will be from 5:00 p.m. to 7:00 p.m. on Thursday, March 12, 2020 at the church. Kibler-Brady-Ruestman Memorial Home is assisting the family with arrangements.

Interment will be at Park Hill Cemetery in Bloomington. Memorials may be made to Disabled American Veterans.

Lloyd proudly served in the United States Navy during WWII. While serving as a boilermaker he spent two years on the Pacific Ocean and received seven battle stars for different Campaigns. He was aboard the USS Norman Scott (DD-690) during the Naval Battle of Guadalcanal, where many were killed and injured.

He was a supervising estimator and project manager for many years. He had a large part in the building of Turner Hall in Normal, the Danville Correctional Center, and College Hills Mall in Normal.

He was an avid hunter and outdoorsman. He took annual hunting trips to Colorado with friends, where he enjoyed hunting elk and antelope.

Lloyd was a loving father and grandfather. He will be greatly missed by all who knew him.


To send flowers to the family or plant a tree in memory of Lloyd Eugene Thacker, please visit our floral store.

Please click here to view the video tribute
To send flowers to the family in memory of Lloyd Thacker, please visit our flower store.