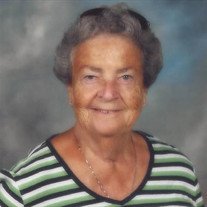 Normal - Lois Jane Brandenburg, 80 of Normal, Illinois, passed away at 3:42 a.m. on Saturday, September 10, 2016 at Heritage Health in Bloomington.

Cremation rites have been accorded. A celebration of life will be at a later date. Kibler-Brady-Ruestman Memorial Home in Bloomington is assisting the family with arrangements.

Memorials may be made to Shriner's Hospital for Children or The American Cancer Society.

Jane was a member of "The Rainbow Girls" and Eastern Star. She was a 1954 graduate of NCHS. Through the years Jane was employed at Chadband's Jewelry, Jack Lewis Jewelry and The Normal Pharmacy.

She enjoyed boating and traveling with family and friends. Orval and Jane were members of the U.S. Power squadron. Their two favorite places for these activities were Lake Michigan and Kentucky Lake.

Jane was a great cook, famous for her Coconut Cream pies and Bread & Butter pickles that were a prized Christmas gift for the kid's teachers in elementary school. Potato Salad was also a highly sought after treat, often available in large quantities for weddings and parties of friends and family. She also enjoyed watching sports, especially football and baseball.

To send flowers to the family or plant a tree in memory of Lois Jane Brandenburg, please visit our floral store.

To send flowers to the family in memory of Lois Brandenburg, please visit our flower store.