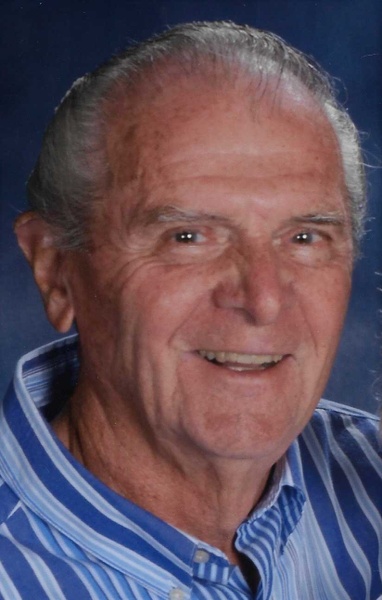 With heavy hearts his family announces the passing of Loren Ira Troyer of Bloomington, IL on July 7, 2022. Loren was 93 years old.

He is survived by his loving wife Katie Troyer; his daughters Jan (John) Cregier and Jill (Brian) Livengood; his grandchildren Lindsay (Josh) Rollins, Courtney (Tim) Golter, Kathryn and Jonathan Livengood; his beloved great-grandchildren Chase, Braelynn, Simon and Quinten. He was preceded in death by his parents Lloyd and Mabel Troyer, and his siblings; Dale, Erwin, Verlin, Donald and Merle Troyer, Earlene Spence, and Lucy Hospelhorn.

Loren was born on October 8th, 1928 and was raised in Hudson, IL.  He was a hard-working man by nature, helping on the family farm as a boy and later building his own family's home by hand. He proudly served the US Army as a combat Sargent in the Korean War and went on to work at Bloomington Offset Printing for 40 years.

He and Katie were married January 13, 1949. They shared 73 wonderful years together- an amazing legacy of love. He has fondly recounted to many the story of their first date, at the original Steak N Shake in Normal. Loren shared many treasured memories with his nieces and nephews, prior to welcoming two daughters of his own. Loren had a close relationship with his daughters and played an active role in their interests. He and Katie were 4-H leaders and Loren assisted many with crafts and sampled countless food projects from all of his “extra kids”.

Loren pursued a variety of passions over the years. He had a love of old cars and enjoyed tinkering with his own collection as well as admiring others at car shows. His girls and grandchildren were all taught to drive in the backyard almost as soon as they were old enough to see over the dashboard. Loren often took his family roller skating and even until the age of 80 could be found at the morning senior skate at Skate N Place.  He discovered his talent for painting later in life and enjoyed developing that skill in his free time. He loved being outside, working with his hands, spending time playing cards and sharing stories with friends and family - all with a cold Pepsi in hand.

Loren was a thoughtful, personable and caring man whose smile could lift up a room.  He loved people- no one was a stranger for long and he developed many life-long friendships. He lived a long and full life and his family will be eternally thankful for the years of memories they've shared. He will be deeply missed.

Visitation will be held on Friday July 15, 2022 from 4:30-6:30 at Kibler Brady Ruestman Memorial Home with a service following.  A graveside service will be held Saturday July, 16 2022 at the Hudson Cemetery, Hudson, IL at 11:00 am. Memorial contributions may be left to the Alzheimer's Association, Wesley United Methodist Church in Bloomington, or the American Cancer Society.

To send flowers to the family in memory of Loren I. Troyer, please visit our flower store.
Send a Sympathy Card