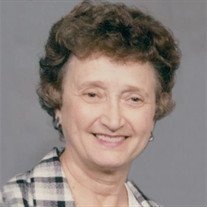 Her funeral service will be at 11:00 a.m. on Thursday, January 19 at Kibler-Brady-Ruestman Memorial Home in Bloomington with Pastor Peter Weeks officiating. Visitation will be from 10-11 a.m. prior to the service at the memorial home.

Interment will be at Pennell Cemetery in Towanda. Memorials may be made to the Alzheimer's Association - alz.org.

Lou was born on July 3, 1928, in Chatsworth, Illinois, a daughter to Russell and Annis Harlan Perkins. She married Walter E. Mounce on July 12, 1947, in Bloomington.

She was preceded in death by her parents and her brother, Kenneth Perkins.

Lou grew up on a farm in Chatsworth, Illinois, during the depression. She learned the lessons of sacrifice that followed her through life. She always put her family before herself.

She graduated from Chatsworth High School in 1946. She loved being a Chatsworth Bluebird and frequently sang the school song for her children.

Lou was a loving wife. When she saw Walter for the first time, she fell in love and vowed to marry him. They had many great times as they traveled across the country after their retirement. Florida was their favorite vacation spot. There was laughter and love continuously through the years. They would have celebrated their 70th anniversary this year.

She was a loving and dedicated mother. From going to every baseball game to attending many band concerts, she was always there. She made things better for her children and wouldn't have had it any other way.

Lou was proud of and renowned for her cooking. Her family enjoyed the best fried chicken and she was the only one in the family that could make gravy. Her potato salad was always in demand as well as her pies and cakes she made from scratch. Thanksgiving and Christmas family dinners were always turkey with oyster dressing. Cooking brought Lou joy as well as to her family.

She worked 18 years at Kathryn Beich Candy Company, and later Nestle USA, in the shipping department. Lou loved her job which included contacting truckers to make sure her chocolate was delivered on time. She was proud of her work and was a joy to work with.

Lou's family extends their sincere thanks to the staff at McLean County Nursing Home for the care and concern given Luella over the last 2 ½ years.


To send flowers to the family or plant a tree in memory of Luella 'Lou' Mae Mounce, please visit our floral store.

Please click here to view the video tribute
To send flowers to the family in memory of Luella Mounce, please visit our flower store.