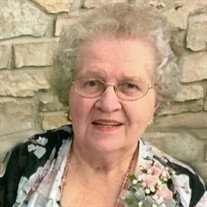 Lydia Louise Buehrer, 91, of Bloomington, formerly of Litchfield, went home to be with her Lord and Savior, Jesus Christ at 2:30 p.m. on Sunday, November 29, 2020 at Martin Health Center in Bloomington.

A private family service will be held at Our Redeemer Lutheran Church in Bloomington with Pastor Peter Weeks officiating. Interment will be at Elm Lawn Memorial Park in Litchfield. Kibler-Brady-Ruestman Memorial Home in Bloomington is assisting the family with arrangements.

In lieu of flowers memorial contributions may be directed to Zion Lutheran Church and School in Litchfield or Bethesda Lutheran Communities, 600 Hoffmann Drive, Watertown, WI 53094.

Lydia graduated from Valparaiso University, Indiana, with a bachelor's degree in 1952. She was a dedicated homemaker for many years and later employed in the cafeteria at Litchfield Middle/High Schools. Lydia was a member at Zion Lutheran Church in Litchfield, where she was active in the choir, handbells, LWML, and church musicals. She was an avid Chicago Cubs fan, enjoyed reading, gardening, and was a gifted cook and baker. She took delight in sharing her produce from her garden with family and friends. Lydia enjoyed spending time with her family, especially her grandchildren. She was dearly loved and will be greatly missed.

The family would like to offer a special thank you to the staff at Westminster Village and Martin Health Center for their compassionate care.

To send flowers to the family or plant a tree in memory of Lydia Louise Buehrer, please visit our floral store.

To send flowers to the family in memory of Lydia Buehrer, please visit our flower store.