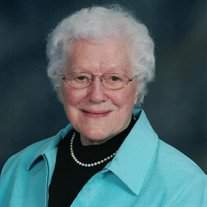 A memorial service for Marjorie will be held at 11:00 a.m. on Wednesday, April 14, 2021 at Kibler-Brady-Ruestman Memorial Home. The service can also be live-streamed on the funeral home's facebook page: https://tinyurl.com/7pzf6uuf

In lieu of flowers, memorials may be made to Preachers Aide Society. www.PASBF.org

Marjorie was born on April 1, 1924 in Bellaire, OH, a daughter to James Burton and Alice Elizabeth Schnegg Hendershot. She married Kim Yong Soon on August 10, 1951 in Ipoh, Perak, Malaysia. He preceded her in death on August 31, 2017.

Marjorie graduated with a Bachelor's Degree in Education. She was an educator for many years including teaching English in South Korea. Marjorie and Kim worked in ministry together in many cities including Kansas City, MO, Evanston, Collison, Hebron, Taylor Ridge, Dallas City, Burnside, Broadlands, Longview, Beason, Chestnut, Farmington, and Casey. Marjorie and Kim also served as missionaries to the Chinese in South Korea from 1964-1969.

Marjorie was a loving mother and grandmother. She will be greatly missed.

To send flowers to the family or plant a tree in memory of Marjorie Elizabeth Soon, please visit our floral store.

To send flowers to the family in memory of Marjorie Soon, please visit our flower store.