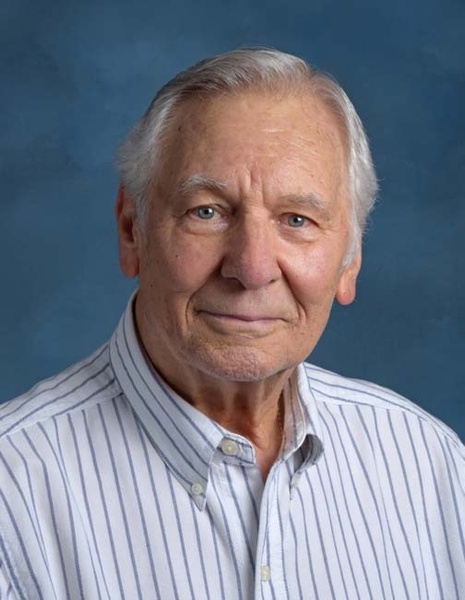 Martin Valentino “Marty” Oman, 87, of Bloomington, passed away at Heritage Manor in Bloomington on July 25, 2022.

Marty was born on February 13, 1935 in Chicago, the youngest of five children to Nick and Anna (Barto) Oman. He was preceded in death by his parents and his four siblings and their spouses: Marian Rose (Anthony) Stolfa, Edward John Oman, Stanley Nicholas (Yolanda) Oman, and Frank Joseph (Florence) Oman.

Marty graduated from Schurz High School in Chicago in 1952. After working as an apprentice in various machine shops, Marty worked in Chicago for IAA (Country Companies) in Data Processing and for WBBM-AM and TV in their music department.

In 1959, he married Carole Diane Thomka with whom he had two children: Edward John and Jamie Lynn.

In 1961, Marty relocated to Bloomington with IAA (Country Life Insurance Company) where he worked in Data Processing and later, Management Information Systems for 32 years before retiring in 1990. He served in the National Guard for 8 years and was discharged as SFC. He had been a member of the Elks, Moose, and Koda Roamers Camera Club, and was currently a member (and twice President) of the Young Men’s Club. After retiring, Marty worked part-time for K&K Machine Shop.

On July 16, 1977, Marty married Patsy Strawn Hrudka whom he met while taking dance lessons at the Tiara Ballroom. They enjoyed dancing whenever he was not drumming. In earlier days, Marty was the drummer for Jim Rice and the Country Gems. More recently, he played with the Silver Foxes at the American Legion in Heyworth, and he drummed for many years with the West Twin Grove Gospel Opry Band. Marty enjoyed most all types of music. Other interests and activities included photography, tennis, and watching Chicago sports and golf on TV.

Both Marty and Patsy loved nature and wildlife and traveled to many National Parks and places including Alaska and Hawaii, and to many foreign countries and continents.

In accordance with Marty’s wishes, a graveside service will be held at 11:00 a.m. on Friday, July 29, 2022 at East Lawn Memorial Gardens in Bloomington. Rev. Herb Knudsen will be officiating.  Arrangements are being handled by Kibler-Brady-Ruestman Memorial Home.

To send flowers to the family in memory of Martin V. "Marty" Oman, please visit our flower store.