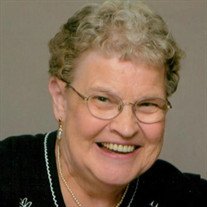 Mary was born August 8, 1936, in East Peoria, the ninth of 11 children of Albert and Lola Ann (Shrode) Youngblood. All but one of her siblings predeceased her.

In 1955, Mary married Joseph Goodlick and moved to Heyworth. During their nearly 25 years of marriage, they raised their four children, all of whom survive: Dan (Darla) Goodlick, Diana Goodlick, and Julie Goodlick, all of Bloomington; and Janice (John Gelbke) Goodlick, of Traverse City, Michigan. Mary later married Robert Geske, and though Bob and Mary divorced, they remained friends. He survives in Bloomington.

Mary is also survived by Dan's children, Parker and Isabelle Goodlick, and her first great-grandchild, Evelyn Grace, born in March. A host of nieces and nephews also survive to mourn her, as does a special sister-in-law, Juanita Youngblood of Saybrook, who was a dear friend and companion to her during her final years living in Gibson City.

Mary graduated from Lynnville (Indiana) High School. She began working once her children were all in school, as a secretary/bookkeeper and in retail sales and service. She retired from the Bloomington K Mart. Mary loved crafts, watching the birds at her feeders, and collecting, especially the joy of searching for unique new additions to her various collections.

The family wishes to express their thanks to the doctors, nurses, and other health care professionals at OSF St. Joseph who cared for Mary at the end. Though Mary did not die of COVID-19, they were still especially attentive, kind, and compassionate to her and her family, despite the current challenges they face due to the pandemic.

At Mary's request, there will be no formal services. She will be cremated. Memorials may be made to Mary's church, the Gibson City First Baptist Church, or to St. Jude Children's Research Hospital.

To send flowers to the family or plant a tree in memory of Mary Louise Geske, please visit our floral store.

To send flowers to the family in memory of Mary Geske, please visit our flower store.
Send a Sympathy Card