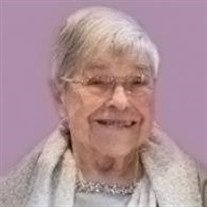 
A celebration of life will be held at the Resident Center, Westminster Village, on Saturday, May 25th. The family will greet friends from 1 p.m. - 3 p.m. with a Remembrance Celebration at 2 p.m. A private graveside inurnment will take place prior to the celebration.

Memorials may be made in Mary Louise's name to the Friends of the Constitution Trail.

Inurnment will be at Park Hill Cemetery in Bloomington. Kibler-Brady-Ruestman Memorial Home is assisting the family with arrangements.

She was preceded in death by her parents, a sister, Jean Wilson and two brothers-in-law, Don Zander and George Wilson.

She served active roles in the League of Women Voters and the Unitarian Church in Bloomington. She was also president of the residents' counsel at Westminster Village.

Mary Louise was an avid Ohio State Buckeyes fan. She enjoyed spending time with her family and friends, especially playing games and was known for her competitive nature.

Mary Louise was a loving mother and grandmother. She will be greatly missed.

To send flowers to the family or plant a tree in memory of Mary Louise Steadman, please visit our floral store.

To send flowers to the family in memory of Mary Steadman, please visit our flower store.
Send a Sympathy Card