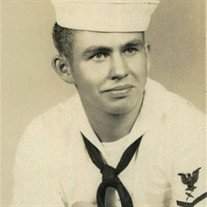 Normal - Maurice D. Whitford,84, of Normal, went home to be with the Lord at 7:59 a.m. on Monday, October 15, 2018 at OSF HealthCare St. Joseph Medical Center in Bloomington.
His funeral service will be at 12:00 p.m. on Friday, October 19, 2018 at Grace Church of the Nazarene in Bloomington with Rev. Michael Stipp and Rev. Mike Oleniczak officiating. Visitation will be from 10:00 a.m.-12:00 p.m. prior to services at the church. Kibler-Brady-Ruestman Memorial Home in Bloomington is assisting the family with arrangements.
Burial with Full Military Rites by the Bloomington-Normal American Legion Honor Guard will be in Park Hill Cemetery in Bloomington. Memorials may be directed to Grace Church of the Nazarene.
Maurice was born on March 9, 1934 in Bond County, a son to Albert and Anna Hopkins Whitford. His father, Albert, passed away when Maurice was 5 years old. His mother later married Elmer Terry who helped raise him. He married Ronna Jean Brucker on December 2, 1961 in Bloomington, Illinois.
Surviving is his loving wife of 57 years, Ronna Jean Whitford of Normal; children, Roger Johnson of Cheyenne, Wyoming, Robert Johnson of Huson, Montana, Tammy (Patrick) Butler of Murfreesboro, TN, Darlene Gillan of Normal, Michael Whitford of Normal; grandchildren, Mattie, Grace, Rob, Nina, Careyanne, Paul, Jordan, Caitlyn, Zach and Matthew; Great Grandchildren, Chanaya, Zedekiah, Ezekiel and Ezra; brother, Ross (Lila) Whitford and his canine companion, Bella.
He was preceded in death by his parents; granddaughter, Sarah Jean Johnson; and two brothers, LaVerle Whitford and Verlin Whitford.
Maurice proudly served in the United States Navy. He was employed at Caterpillar, Inc. For 30 years as a machine operator, retiring in 1996. He also worked as a barber for 40yrs.
He was a member of Grace Church of the Nazarene and the Bloomington-Normal American Legion Post 56.
Maurice enjoyed Western and Military Movies, Country and Southern Gospel Music.
Maurice was a loving husband, father, grandfather, brother and friend who will be greatly missed.


To send flowers to the family or plant a tree in memory of Maurice D. Whitford, please visit our floral store.

To send flowers to the family in memory of Maurice Whitford, please visit our flower store.