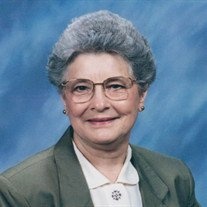 Her funeral service will be held at 1:00 on Wednesday, January 9, 2019 at Kibler-Brady-Ruestman Memorial Home in Bloomington.

She will be laid to rest, next her husband, at Park Hill Mausoleum in Bloomington. Memorials may be made to the Charles Bolen Scholarship Fund at Illinois State University, Illinois Symphony Orchestra, or to St John's Lutheran Church.

Maxine was born February 4, 1926 in West Frankfort, IL. Her parents were Carrie Louis and Ora Sheffler. She was a music major at Northwestern University, graduating in 1948. She met and married her husband, Charles W. Bolen while at Northwestern. Maxine taught music in Rochester, N.Y., Charleston, IL, and Ripon, WI. While her husband was at Indiana University she was a child welfare worker for the state of Indiana in the Bloomington, IN area.

After moving to Missoula, Montana she continued teaching music and for eight years directed a children's choir in the local Episcopal Church. In 1970, the family moved to Normal, IL where she continued to teach piano for more than 30 years.

She was a member of St. John's Lutheran Church in Bloomington and the Normal History Club. Maxine was active in the Symphony Guild for many years.

Surviving are daughters, Ann Kossakowski of NJ and Jayne (John) Kreinbihl of PA; six grandchildren; and a brother, Bill Sheffler of Bloomington.

Maxine was preceded in death by her husband in 2010.

To send flowers to the family or plant a tree in memory of Maxine S. Bolen, please visit our floral store.

To send flowers to the family in memory of Maxine Bolen, please visit our flower store.
Send a Sympathy Card