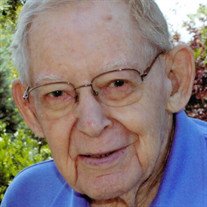 Merlin was born on September 20, 1926 in Hancock County, Illinois, a son to Jesse and Maxine (Flack) Jones. He married Elaine E. Wollbrink on September 6, 1947.

He was preceded in death by his parents, sisters, Betty Jones and Donna Hendrickson, brothers, Dean Jones and Jackie Jones, and two grandchildren.

Merlin was a graduate of Quincy College and received his Master's degree from the University of Illinois. He worked as a teacher and coach at Unity High School in Mendon for twelve years, and later for Niantic-Harristown High School in Niantic for three years. He served as principal at Brown County High School in Mt. Sterling for thirteen years and four years as superintendent for the schools in Bethany.

Later, he worked for nine years at the Office of Admissions and Records at the University of Illinois. He also worked as a lobby attendant at McDonald's for twenty years at their College Avenue location in Normal.

Merlin proudly served his country in the United States Army during the conclusion of WWII staying a year in Japan in the army of occupation. He was a member of First United Methodist Church in Normal and participated in seven mission trips. Merlin was also a longtime volunteer for the local Habitat For Humanity.

In lieu of flowers, memorial contributions may be left to Habitat For Humanity of McLean County. Kibler-Brady-Ruestman Memorial Home in Bloomington is assisting the family with arrangements.

Online condolences and memories of Merlin may be left for his family at kiblerbradyruestman.com.

To send flowers to the family or plant a tree in memory of Merlin L. Jones, please visit our floral store.

To send flowers to the family in memory of Merlin Jones, please visit our flower store.
Send a Sympathy Card