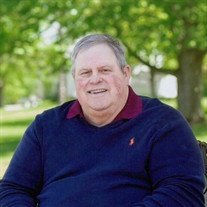 Visitation will be from 2:00-4:00 p.m. on Saturday, January 18, 2020 at Hudson Christian Church in Hudson. A funeral service will follow at 4:30 p.m. at the church with Pastor Brandon Current officiating. Full military rites will be accorded by the Bloomington-Normal American Legion Honor Guard.

Cremation rites will be accorded after the funeral service. There will be a private interment at Pleasant Grove Cemetery in Downs at a later date. Kibler-Brady-Ruestman Memorial Home in Bloomington is assisting the family with arrangements.

In lieu of flowers, the family request donations be made to the Michael K. Nafziger Memorial Fund c/o IAA Credit Union, 808 IAA Drive, Bloomington, Illinois 61701 for his Grandchildren's Education Fund.

Mike played football for Bloomington High School, attended Illinois State University, and served in the US Army as a Military Police Officer at West Point, New York with an honorable discharge in 1971 with the rank of Sgt. E5. Even though he was not stationed overseas in wartime, he proudly served his country as a US citizen/serviceman. After service, Mike worked as a roofer for Acme Roofing and SheetMetal, Co; he and his two brothers bought the company in 1983 and Mike served as President until his retirement in 2007.

He was a member of BPOE 281 Elks Lodge, the American Legion Post 931 of Towanda, a Master Mason of Bloomington Masonic Lodge #43, and a member of Hudson Christian Church.


To send flowers to the family or plant a tree in memory of Michael K. Nafziger, please visit our floral store.

To send flowers to the family in memory of Michael Nafziger, please visit our flower store.