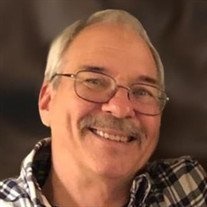 BLOOMINGTON - Michael "Mike" J. Tinsley, 68, of Bloomington, passed away peacefully on Friday, June 5, 2020 at 11:00 pm at his home after a heroic battle against cancer.

He was born in Normal, on November 5, 1951, to Waldo E. and M. Jane Lohnes Tinsley. He is preceded in death by his parents, his Uncle George Lohnes, and his half-brother Bill (Vicki) Tinsley.

He married Carol Houck Christenson Tinsley at their home in Bloomington on October 4, 2009. She survives along with their daughter Kelly (Mark) Simon of Aurora and their son, Corey (Heather) Christenson of Pontiac. He also leaves five adoring grandchildren: Christian and Aubree Simon, and Aiden, Hunter, and Cale Christenson. Mike is survived by two aunts - Joyce Theobald and Mona Lohnes - and three dear cousins - Kathleen Emery, Colleen (Larry) Harris, and Charlene Emmons and their families.

Mike grew up in the Bloomington-Normal area, and his roots there run deep. An important part of Mike's legacy is the impressive catalog of clients and friends he established in his 22 years of business as the owner of Mike Tinsley Heating & Air Conditioning. His dedication and loyalty to them were highly respected, and their friendships and stories are filled with love and admiration. They were more than just clients, as Mike could even tell you not only the HVAC service he provided but also the names of the pets he encountered on each call.

Mike's many interests included restoring pinball and gaming machines, caring for their Cavalier King Charles Spaniel (Eli), and spending time with family and friends at The Farm in Mazon, the athletic arenas in and around Pontiac, or the performance halls and gyms in the Chicago suburbs supporting his children and grandchildren. 'A kind and generous heart.'

Anyone who knew Mike knows that the cancer could not touch his heart, and a Celebration of Life is planned for the fall of 2020 at The Farm. Kibler-Brady-Ruestman Memorial Home is assisting the family with arrangements.

In lieu of a visitation or flowers, Mike arranged for donations to be made to The Farm Building Memorial (c/o Carol Tinsley, The Farm Building Memorial 1907 Owens Drive Bloomington IL 61701) at The Farm property outside of Mazon, Illinois, where his ashes will eventually be spread. It was there that Mike found happiness and joy along the Mazon River while fishing, riding the trails, and enjoying the peaceful surroundings with family.

To send flowers to the family or plant a tree in memory of Michael "Mike" J. Tinsley, please visit our floral store.

To send flowers to the family in memory of Michael Tinsley, please visit our flower store.